Protestors against Ontario’s sex ed curriculum compared the teaching guidelines to Canada’s dark history of residential schools. Speakers at the rally on the lawn of Queen’s Park Tuesday, including a federal Conservative leadership candidate, said the new curriculum infringes on parental rights and drew comparisons to the forced schooling of generations of indigenous children.

Trost said after his speech that the Ontario sex-ed curriculum is “not nearly” the same level of seriousness as residential schools, but “the underlying principle is the same.”

Ontario’s new sex-ed curriculum was implemented last fall with polarizing results as some parents loved it and others pulled their children from class. Entering its second year, the debate continues. “When you take the shame out of your body parts, I think that’s a very important building block for understanding and respecting your body, and somebody else’s,”

All parents should have say in sex-ed changes: PCs 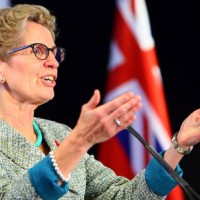 The Ontario Liberal government should release its new sex education curriculum for all parents to see and comment on before implementation in the next school year, Progressive Conservative MPP Monte McNaughton says. “This is another Liberal broken promise — another example of Liberal contempt for voters and parents in the province of Ontario,” McNaughton told Premier Kathleen Wynne Tuesday in the legislature. “It seems you are afraid of telling parents what you intend to teach their children… Read More

School boardshave put out a curriculum that encourages children to question their gender identity by telling them they may not be the same gender as their anatomy TDSB Equity Inclusive Curriculum – See Page 10 .pdf”