The Liberal Party has been salivating for years at the thought of legalizing cannabis and they are on the cusp of passing bill C45 that will proliferate the sale and use of marijuana across the country. In their cold, callus way they are going to put our children in jeopardy by allowing little ones as young as twelve years old to possess up to five grams of dried marijuana, ten joints.

For the sake of the children C-45 must be stopped.

It has been proven that smoking cannabis harms a child’s development, yet the bill says in Division 1, Section 8-Possession “it is prohibited for a young person to possess cannabis of one or more classes of cannabis the total amount of which, as determined in accordance with Schedule 3, is equivalent to more than 5 g of dried cannabis.” It goes on to say a “young person means (a) for the purposes of sections 8, 9 and 12, an individual who is 12 years of age or older but under 18 years of age.”

MP Dr. Kellie Leitch, pediatric surgeon says “The Liberals have thrown the scientific evidence out the window. The evidence is extremely clear, up to the age of 25 the developed brain can be impacted by this dangerous drug.”

Sure selling weed may make Trudeau’s government $4 Billion per year according to a Liberal policy paper, but think of the destruction. Imagine the healthcare costs of treating people damaged by this drug. Think of the sky rocketing death toll from marijuana impaired driving. He may get his $4 Billion but it will be on the backs of suffering Canadians.

This dangerous drug must not be pushed by Canada’s government. Ontario’s financiers are prepping the launch of 150 stores that promise to make this drug readily available across the province. Proliferating a dangerous drug, especially to children, is wanton, reckless leadership.

For the sake of the children we must stop Bill C-45. Please go to stopmarijuana.ca, sign the petition, donate what you can and send this news to your friends.

You can make a difference, if not you, then who, if not now when?

Please donate today to this important cause! 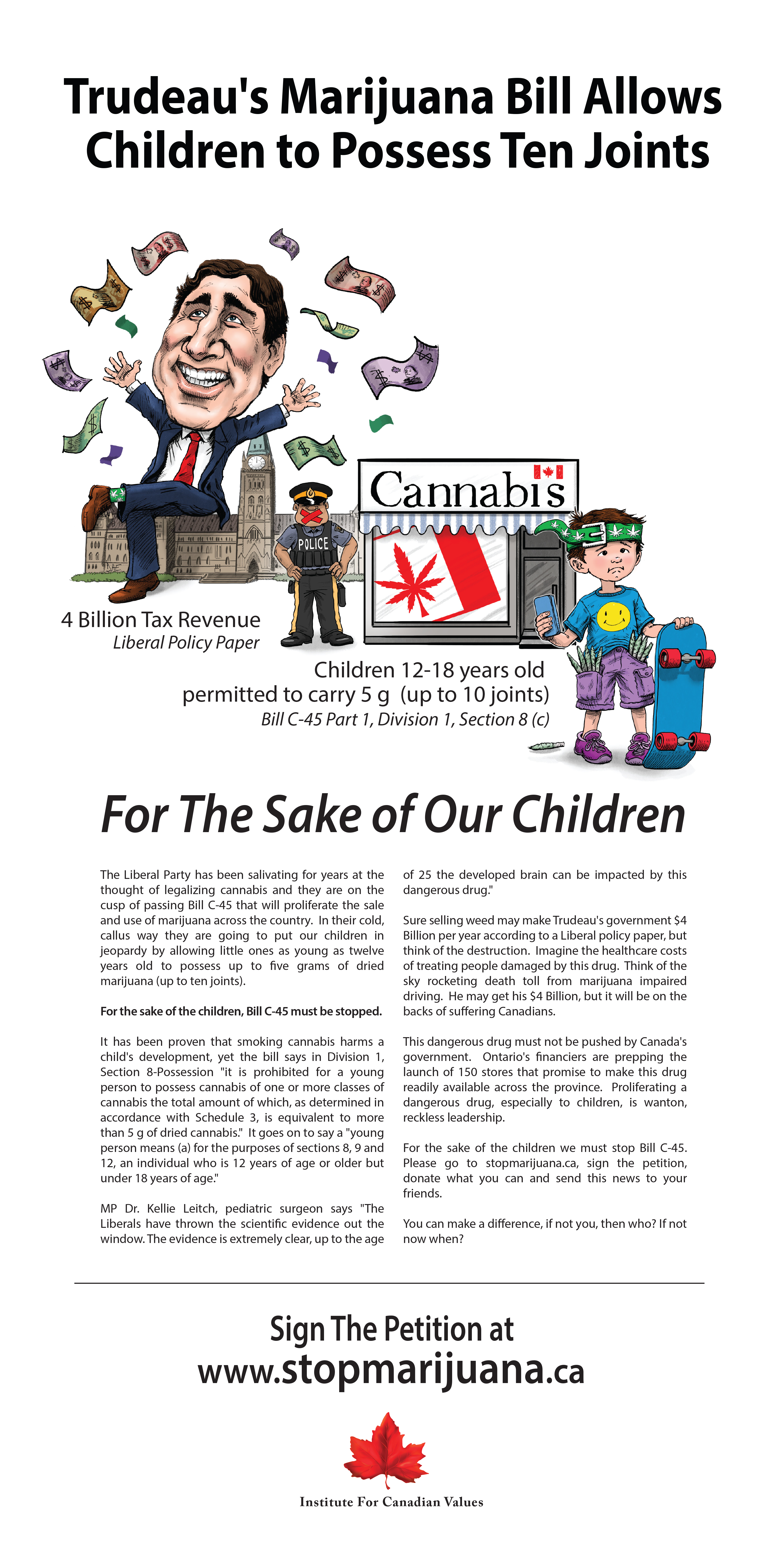 Stop The Legalization of Marijuana

Petition to the Government of Canada,

We, the undersigned citizens of Canada, call upon the Government of Canada vote against Bill C-45. Under Bill C-45 Section 8 it states that “it is prohibited for a young person to distribute cannabis of one or more classes of cannabis the total amount of which is equivalent . . . to more than 5 g of dried cannabis”. This allows children between the ages of 12 and 18 to be able to possess around ten joints! It is a proven, scientific fact that smoking cannabis harms a child’s development in numerous ways. This drug should not be made available to young people.